Three foods to avoid in your world travels:

Relleno – rice soaked in pigs blood and deep fried to a burnt crisp inside cow intestine.
Acrid taste, but went down reasonably well. It’s the aftertaste you have to watch out for -- it was truly awful and didn’t go away for a full 24 hours.

Mystery Soup. Since I don’t know the “official” name for this dish, let’s just call it Mystery Soup à la boiled cubed cow hoof. It’s the texture coupled with a vivid imagination that gets you on this one. You see, the cubes are rather large and boiled to a rubbery jelly consistency. The combined result is nothing less than a culinary atrocity. The rubbery quality of the cube makes it impossible to bite, chew, or squish into smaller more manageable pieces (think of trying to chew a large chunk of latex). Meanwhile, the jelly-like property allows it to ooze around inside your mouth, coating all interior surfaces with a layer of foul tasting slime. To me, the experience was similar to trying to eat a very large slug with supernatural powers that allowed it to resist all attempts at dental masticating, all the while squishing from one corner of the mouth to the other, laughing at your vain effort and leaving behind its signature “snail trails.” Surprisingly I have not yet reached the worst part. Swallowing. At some point, you will reach the inevitable conclusion that there is no way (short of being lucky enough to have had green kryptonite fillings put in your teeth instead of the standard silver or white) to whittle down the slimy hoof chunk. Unfortunately, it is just large enough to trigger your gag reflex on the way down (like you needed more incentive to puke – you’re eating a deceased cow’s foot for goodness sake – do you even know where that thing has been?!) as you forcefully swallow it… again and again and again… until it finally clears your throat. Ugh. I was in a cold sweat by the time I finished my bowl of Mystery Soup.

Fried cutting of pigskin. Not to be confused with pork rinds, this delicacy (that’s what we call something most people find repulsive, right?) is a two-faced monstrosity like something Homer might have written about in the lliad…

“The monster, spawned in the very depths of Hades, rose from the festering lake of oil and reared its legendary two-faced head. One side beguiled the unwary adventurer with its gooey soft texture of boiled fat, dripping as though wounded from battle – an easy mark for the kill. Yet, the opposite face, separated by a layer of skin tough like the leather of a well cured shield, showed no such weakness. Coarse hairs, stiffened from the creatures time spent in the boiling cauldron that had helped transform it to this hideous state, protruded at disgusting angles, threatening to tear apart the throat of anyone who dared to do it battle.”

Nasty smell, hideous to look at, terrible to taste, and worse to swallow. Ouch. Yuck. Enough said.
Launched by Dakrat at 21:51
4 Critical Additions -- Leave Yours. Now.

Because I'm feeling Lazy. That's why.

Less effort required on my part here folks, so I'm not feeling too bad about the whole deal.

This one is like those Energizer Bunny commercials where they start off showing a preview for the first show you have seen in a long time that actually looks like it might have promise, and then it happens -- the annoying bunny pops up with his "I'm cooler than you and I know it" sunglasses, endlessly beating on that cursed drum to signal the end of your fantasy. Ah well, at some level you must have known it was too good to be true anyway.

Along those lines, while the link below will take you to an outstanding movie trailer, be forewarned that there is no movie. Just the trailer. Actually, since the trailer is the movie, I guess there really is a movie. It's just very short... and looks like a trailer... for a movie... that doesn't exist. I think you get my point -- just go see for yourself. Then laugh. Laughing is good. Ha Ha. Ha.

This random thought does not come to you from me, but from another source entirely -- the 2007 Miss Teen USA pageant. No, thought is too strong a word… perhaps open mouthed vocalizations of a mild brain spasm. Yeah, that seems more appropriate. If you don’t know what I’m talking about or haven’t seen Miss South Carolina in all her oratory glory, follow the link below. Viewer Beware: your IQ may drop a point or two during the video.

http://www.youtube.com/watch?v=OY8plOGLVeg
Launched by Dakrat at 17:27
1 Critical Additions -- Leave Yours. Now.

Due to inspection preparation at work, I have been working long hours (12-17 hour days) recently, so it was no surprise when I arrived home after midnight a week or so ago to find everyone sleeping. Nikki often waits up for me, but I had encouraged her to go to bed at a decent hour that night in order to get some much needed rest. As I quietly opened the front door (well, as quiet as you can open a door with hinges complaining about being worked in sub-zero temperatures), all I could think about was how wonderfully warm it was in the house. You see, the drive from work to home or vice versa is just long enough to freeze an average size humanoid to the core, but not quite long enough to allow the overwhelmed heater to do anything much more than blow super cooled air directly at your forehead so you don’t miss out on the fun of having an instant brain-freeze to accompany the rhythmic convulsing of your hypothermic body. Granted, we had not yet reached the -50 degree temperatures of late. In fact, in retrospect it was really rather balmy at -11 °F. Nonetheless, at the time it can truly be said that I felt cold. But I digress.

Upon closing the door, I pleasantly noted that it only took one forceful slam to fully engage the latch; as it often takes three or four tries before the door will stay fully shut and not just pretend to be completely shut and still open and close an inch or so when the wind or something else gives it a push or tug—much to the dismay of a disoriented and sleepy me who gets ejected from bed to “go find out who is trying to break into the house” (and do what I ask when someday I find the boogey-man crowbarring his way into my home? Stand there in my pajamas and stupidly stare at him, hoping that the red in my eyes is mistaken for anger and the drool escaping from my lethargic mouth identified as rabid foaming? Yes, he may very well run for his life, but it will more likely be the overwhelming smell of poopy diapers in the trash and potty training children’s “incidents” that cause him to flee than the less-than-intimidating figure he will find stumbling about in the dark entryway vainly attempting to secure the domicile so he can just go back to bed).

Now, while I am sure you are on the edge of your seat eagerly anticipating what menial task I will describe in detail next, due to the fact that it is getting late and what small portion of conscious grey matter I have left is desperately trying to communicate the fact to me that I am rambling incoherently, I will finally get to the point.

After I shut the door and turned on the light in the kitchen I was greeted with the odd sight of a milky white substance pooling out from under the portable dishwasher. Since this was not the usual state of things, I decided to investigate. I carefully rolled the dishwasher aside, revealing a much larger pool of the liquid which I quickly and correctly identified as milk (the milky white color being my first clue, and the empty soymilk container the second clue). 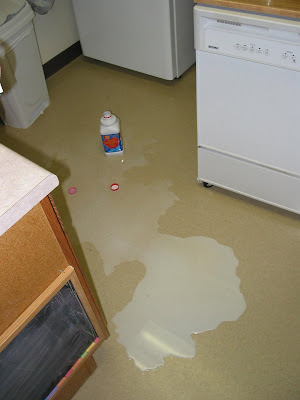 Something else peaked my interest at this point. First, it did not appear that the puddle (perhaps more appropriately regarded as small pond where geese flying south for the winter might have stopped to rest for a time) was comprised entirely of soymilk – it being too white and unscented for vanilla soymilk alone. And second, why were there two lids floating about instead of just one? Upon closer inspection, it became apparent that the second lid belonged to a gallon jug of skim milk which, much to my dismay, was not to be found in the fridge where it belonged nor anywhere in the kitchen for that matter. This mystery was short lived however as I discovered a second scene of the crime at the top of the stairs in front of my bedroom. 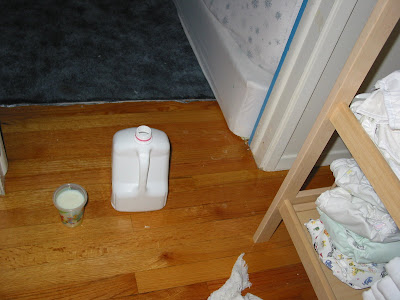 An empty milk jug sat unassumingly on the floor accompanied by a lidless sippy cup, which surprisingly was quite full of milk. It all became clear now. Bun had woken up at some point and likely requested a sippy of milk. His sleep deprived mother was apparently unresponsive to his middle-of-the-night-two-year-old needs, and the thirsty toddler decided to take matters into his own hands. Unfortunately, while he is a master of dragging drinks of choice from the fridge and removing sippy cup lids, he is still a novice drink pourer and sippy cup lid emplacer. I can just imagine the poor fellow first spilling milk about and sloshing through it in his footed pajamas until exhausting the source and then trying again with a second container. At some point, he probably got enough liquid in the sippy to satisfy him and I’m sure at that point he capped it only to have the lid pop off as he tried to get a drink—subsequently drenching his upper half. Somewhere in this process, he carted the milk jug upstairs and took another shot at quenching his thirst.
Sadly though, I believe that he never did get so much as a sip; evidenced by the fact that I found a full, lidless sippy in the bedroom doorway and an exhausted and thoroughly drenched Bun lying undressed down to the diaper on my bed. My heart went out to him as I noticed his disheveled state and that he had even tried to clean up some of the mess with the kitchen towel (which now lay soaked next to the sippy and jug upstairs). Do not fear, for this story does have a happy ending. Before calling FEMA and starting the cleanup effort, I retrieved the surviving sippy of milk, topped it with a clean lid and offered the drink to a grateful Bun. 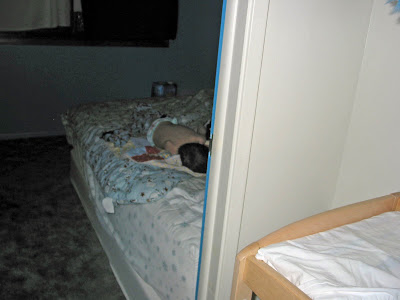 I was amazed to realize that while the carpet sloshed under my feet and my blankets, sheets, pillow and bed were dripping wet, my dear wife lay sleeping perfectly contentedly a mere foot or so away from the Bun and his chaos. Five full-sized towels, one diaper, one set of pajamas, one new pillow and pillowcase, and several cloth diapers later I decided most of the damage had been contained and I could safely get a few hours of sleep before my alarm went off at 6 a.m. to start another adventure filled day in the land of inspection-prep and fatherhood.

I am grateful for these interludes to “normal” or routine life that help me remember that we are here on Earth to learn and grow. Even when we try and fail and try again until all our efforts are exhausted and we can not go on and it seems no one can help us, at the right moment the Lord will come along to help us clean up those messes we started to fix but hadn’t the power to finish alone.

Dakrat
Happy father of eight and husband to my wonderful one and only Nikki.